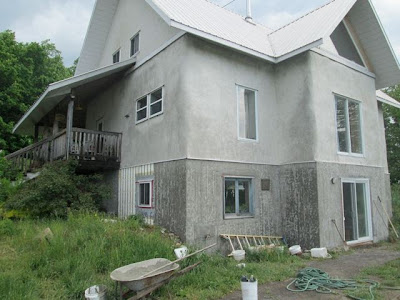 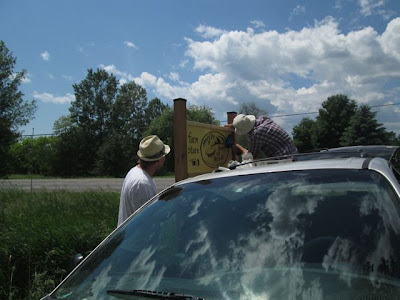 This summer has been a big one so far here at Honey Pie world headquarters.  We opened our new farm store which meant a lot of farm beautification.  We finally finished the outside of our basement which is where our workshop and store are.  It was exposed insulated concrete forms for a few too many years.  This photo shows what it looked like with only the last bit of exposed wall.  It's near the porch and is white with vertical black stripes.  We parged the walls with two coats of lime cement plaster.  This is the first coat.  Next I painted a sign to let people know where we are.  No more being a secret location for us.  It was very exciting the day we actually installed the sign at the end of our lane.  My honey man
sat on top of our van to attach it to the posts.  People keep telling us our sign is too small and they drive right by so we've added a couple of flags to it.  I think I'll make the whole thing bigger one day but for now it's going to have to be enough.  It's been fascinating to see how many people find us anyway. 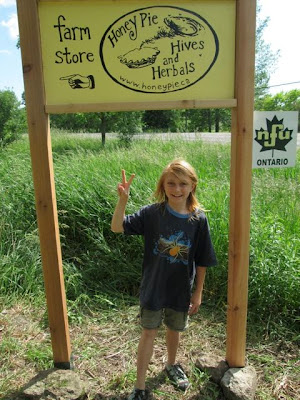 We are very touched by the concern that our visitors show for the situation with the bees.  The question on everyone's lips is, "What's happening with the bees?"  We wish we could answer this question but it's a complicated situation.  There has been a lot of media attention on the bees this year and we struggle to keep up with all the information that is out there.  We know that GMOs are not a good thing for bees.  Neither are pesticides.  In Europe there has been a two year ban on neonicotinoid chemicals in order to see if the bees recover.  My feeling is that this isn't long enough to see a full recovery.  If you support the ban of neonicotinoids here's a petition to sign.  Here's another one from Elizabeth May.  We have suffered unusually high winter losses this past year and Gavin has worked very hard to build our hive numbers up again.  We don't know exactly where our bees go but we are careful to position them on farms that are not using GMOs or pesticides.  We can only hope that the bees find enough flowers nearby and don't have to venture into dangerous territory. We went to my sister's wedding in Vermont this summer and had a great time with our family.  On an excursion to Brattleboro one day I found this amazing product called Fire Cider.  I love the label art!  It's apple cider vinegar with ginger, horseradish, chilies, garlic and I think some other stuff infused into it.  You take a shot in a glass of water when you're feeling a cold coming on.  If that doesn't chase away a cold I don't know what will!  Vermont has a long tradition of using apple cider vinegar to treat colds and all sorts of ailments.  I didn't buy it because I decided to try making some myself.  I've been using apple cider vinegar in this way for years but never thought of infusing all these other herbs into it.  It's funny because I've been making drinking shrubs for a local restaurant - Agrarian Speakeasy in Bloomfield this year.  I soak fruit, herbs or veggies in vinegar and sugar to make a sweet and tart syrup for cocktails.  The most popular one is rhubarb and ginger in apple cider vinegar. 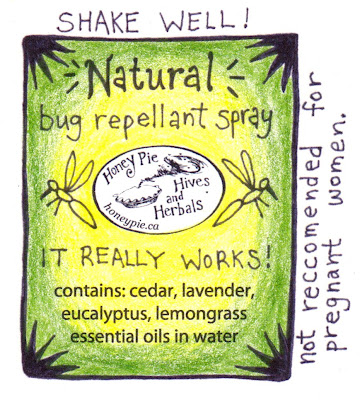 New this year is a Health Canada ban on citronella in bug spray.  We think this is junk science but are forced to comply.  We've made a new recipe using lavender, cedar, eucalyptus and lemongrass.  It smells great and it works!

We have a brand new tea called Lavender Tea.  I've had a lot of requests for a tea with lavender in it so I came up with this formula which I think is delicious.  I've been enjoying it iced.  It's made with lavender, oat straw, lemon verbena, and mallow.  Oat straw is very tasty and high in calcium. 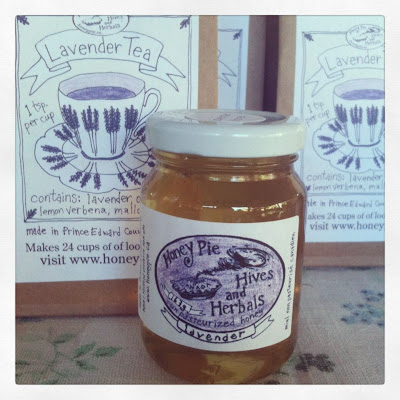 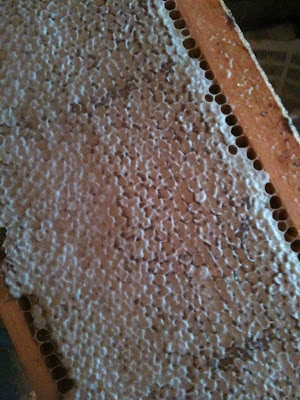 We've been harvesting honey a lot although it looks like we won't have as much honey this year as we had hoped.  This is a frame of capped honey just about to be uncapped and spun in the extractor.  The lavender honey harvest is in and on the shelves at our farm store, the Brickworks and Green Barns farmers markets in Toronto and at the Prince Edward County Lavender Farm. 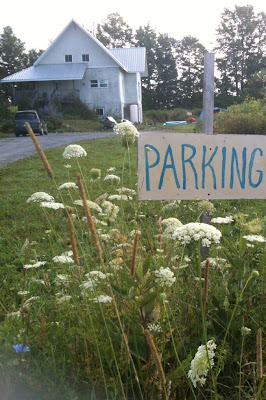 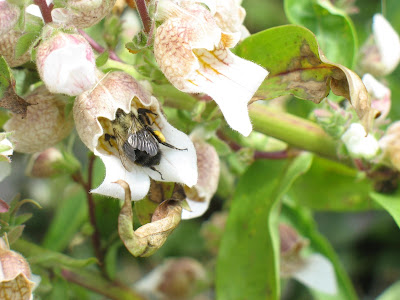 We even have a new parking sign - things are getting so official around here.  In this photo you can see the finished parging on the basement.  It looks like it's always been there now.

I'm still photographing bees but I don't limit myself to honey bees now. This is a beautiful bumble bee snuggling into a foxglove flower. 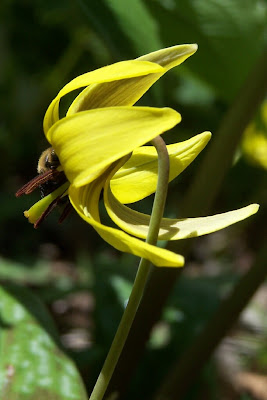 What a long slow spring it's been.  Our bees have been buzzing around the few flowers that are out looking for anything they can find.  This is a photo of a bumble bee in a trout lily.  We feel a bit like the bees as we bundle up and sit outside in the sun even though we're shivering.  The first bonfire of the year was just what we needed to toast us up.  We've been thinking a lot about a healthy alternative to marshmallows.  It's so much fun to roast something over a fire but the GMO corn syrup isn't one of our favorite things to ingest.  I did plant some marshmallow in the garden last year so maybe I can try making my own from the actual plant.  Here's what I found when looking for recipes.
I started teaching workshops this year.  Click here to go to our Facebook page with a list of all the workshops.  I've scheduled one a month from spring until fall.  The first one was a soap making one in April and it was lots of fun.  We made mint soap.  My next workshop is May 5 – Wild Crafting for medicine and food – What to eat and what to avoid. Learn which wild plants are ‘choice’ delicacies and which are just for looking at. We’ll discuss how best to preserve the plants and try out some recipes like wild pesto and nettle soup. I'll teach how to make tinctures, oil infusions and how best to dry herbs. We'll work with using field guides to identify plants. 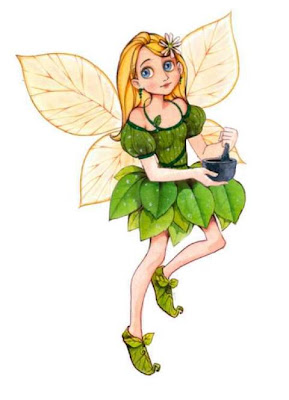 I've signed the kids up for a herb course this year that's called Herb Fairies.  It's by the lovely folks at Learning Herbs.  We bought their board game Wildcraft for the kids for Christmas and it's really inspired all of us to learn more about the plants that grow wild all around us and are useful in so many ways.  This is a picture of the first herb fairy from the course - Stellaria.  That's the Latin name for the common weed Chickweed.  They get an illustrated ebook about a different herb fairy each month.  There are activities and recipes and colouring sheets.  It's been very exciting for all of us. 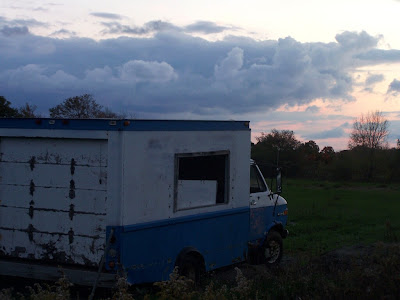 My solar herb dryer project got put on hold over the winter but I am ready to go with all the parts for the greenhouse now.  I'm building a small greenhouse off of this old blue and white food truck.  The idea is to dry the herbs on wire racks in the truck box and use the greenhouse to heat it up in there.  Air flow is key when drying herbs so I'm making vents from the greenhouse into the truck and installing roof fans on the truck to draw the hot humid air out.  I'm hoping to not have to use any electricity to power the fans but rely on the convection action of hot air rising to turn the fans.  My original idea was to use recycled windows to build the greenhouse but I was worried about the truck shifting over time and cracking the glass.  I decided it would be safer and quicker to build a plastic hoop house instead.  It may not look as nice but I'm planning to make it work.
The big news this year is the opening of our new Farm Store!!! 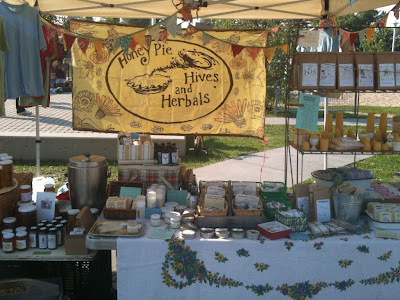 We plan to open June 1 and keep the store open until the end of October.  We'll be open 9-5 Wednesday - Sunday.  We're working hard to beautify the place in time.  We'll celebrate with a Grand Opening on Sunday June 9.  This will be a day long tea party with honey tasting, home made scones, garden tours and more. Since I don't have a photo of what our farm store will look like, I'll give you this photo of our booth at the Wychwood Green Barns farmers' market.  We'll still be at the Brickworks and Green Barns farmers' markets each Saturday year round.

It's already the end of January but not too late for me to wish you a Happy New Year!  We have so many exciting plans for the year ahead!  We are finally going to open our farm to the public.  We're fixing up the entrance to our workshop and making a little store here.  I have a sign to paint - something I enjoy doing.  It's beautification time at Honey Pie World Headquarters.  No more living in a secret location for us.  We will have an official Grand Opening in June to celebrate all things honey and herbs.  Activities will include a wild herb walk and a herbal tea party under a tent.  Mini honey pies will be served - hopefully by fairies or maybe children if we can convince them to dress up.  Stay tuned for more details. 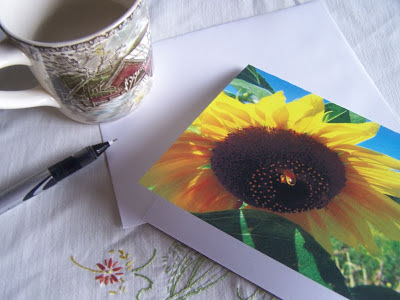 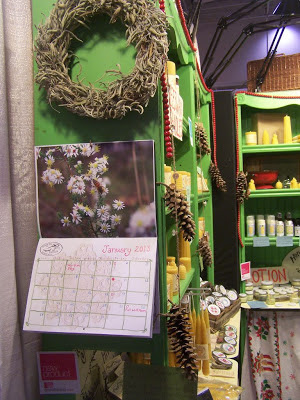 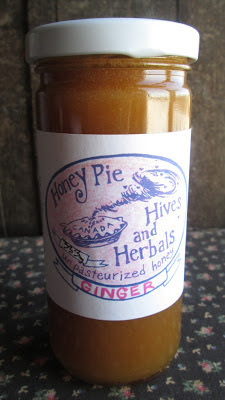 Here's the winning photo from my photo shoot of my new greeting cards for our website.  I got my favorite photos of honey bees on flowers made into blank greeting cards.  They've been selling very well - I'm so thrilled!  I'm looking forward to more following the bees around this year. I even made a calendar with the photos and sold out!  This year I'll make the calendar a bit earlier in the year - I had it ready by the end of November but that was a bit late for some people.

This is a shot of my calendar in our booth at the One of a Kind Show.  January's flower is a white aster which has medicinal uses as well.  It was a marathon show as usual but we had fun with it and posted daily photos of our outfits on our facebook page.


We have two new flavoured honeys available.  They are Ginger and Chocolate.  They've been getting rave reviews and our always popular Cinnamon honey is starting to feel threatened.  I've been giving out samples of honey at the farmers markets now that we're indoors and the yellow jackets aren't a problem.  People are often confused and then amazed by the idea of flavoured honey.  We don't use any flavourings - just ground organic ginger, cinnamon, cocoa etc. The moisture in the honey releases the flavour of the ground spice and it becomes tastier over time.  I like the ginger honey in a cup of hot lemon and honey. 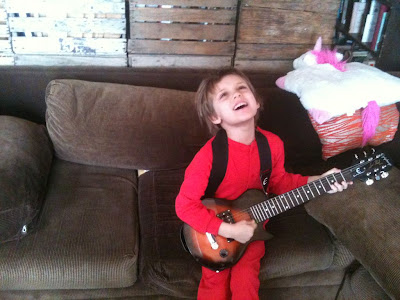 I love this photo of Hazel playing the electric guitar.  She really knows how to hang around all day in her jammies! 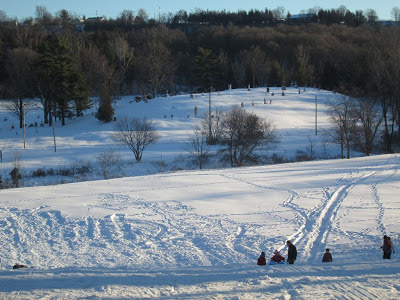 When we're not hibernating in our pajamas we do a bit of sledding in Picton.  This is a popular spot for sledding and pretty terrifying for all of us - in a good way.  The thrill is intense.
Posted by Bay Woodyard at 12:27 PM 2 comments: