A Swarm in June is Worth a Silver Spoon 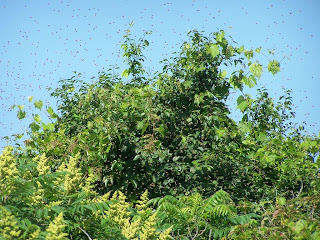 It has been too long since I've posted so I think I had better make several posts so they don't get too big. This one is all about the bees. Not just honey bees but other pollinators as well.

The first photo is of a swarm of honey bees getting ready to land in a tree. They are flying around in what appears to be controlled chaos. It took about ten minutes or so for them to fly up out of the beehive and over to this tree near our driveway - about 40 feet away. They make a really loud buzzing sound and fly in a swooping circular pattern. They all move together as a group and settle onto something - usually a tree branch. This particular swarm actually decided to go back 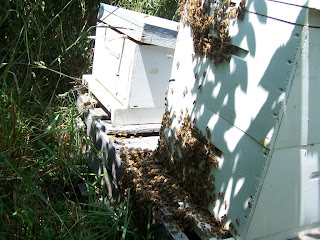 to the hive. I guess they decided conditions weren't right to move house at that time. We had never seen that before so I took a photo of them all crowding back into the hive. My honey man then went in and split the bees into two hives to prevent them from swarming again. When a hive swarms the old queen goes with them and a new queen is left behind with lots of bees and all the larvae to hatch out. They swarm because the hive is really strong and it's getting too crowded. It's good to catch the swarm so you have another hive but it's not always possible. Sometimes we catch them and they decide to leave again anyway. 'You never can tell with bees.' A.A. Milne 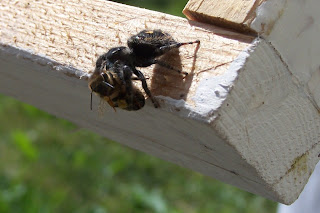 This photo of a bee being eaten by a spider is just because. This is the second time I've seen this recently. I wonder if bees taste like honey?

I left a patch of wild motherwort growing in my garden because we use it in our herbal tea, Femininitea which is for PMS and menstrual cramps. Motherwort is a natural sedative which is safe for women to use when pregnant or nursing. It has a bitter taste so we blend it with bee balm as well as cramp bark, bayberry bark, and raspberry 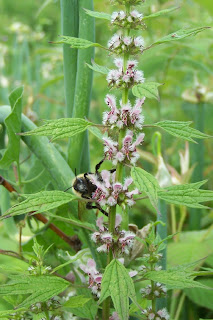 leaves in our Femininitea which gives it a flavour similar to earl gray tea. This is a bumble bee on the motherwort flower.

Here is a honey bee collecting pollen from a gorgeous pink climbing rose. I posted a similar picture last year too but I can't resist. 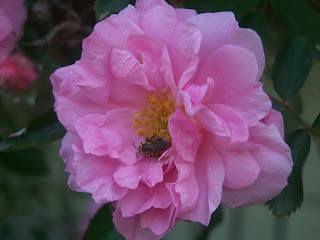 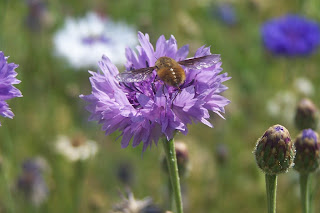 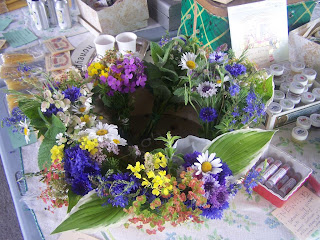 Here is a very strange looking long legged bee or some kind of insect on a purple bachelor's button. I haven't figured out what it is yet but it is new to me. Anyone know what it's called?

I've been making bouquets for the farmers' markets again for several weeks now. This picture is from the Evergreen Brickworks Market. We also sell the bouquets at The Stop's Green Barns market. I use a combination of wild flowers like daisies and bladder campion, herbs like mint and oregano and garden flowers like bachelor's buttons and spurge and leaves like hostas. The varieties change over the season but I always mix them all together. 'Weeds are flowers too, once you get to know them.' A.A. Milne

We have discovered these amazing organic beekeeping podcasts. I especially enjoy the fat bee man.
Posted by Bay Woodyard at 2:12 PM No comments: